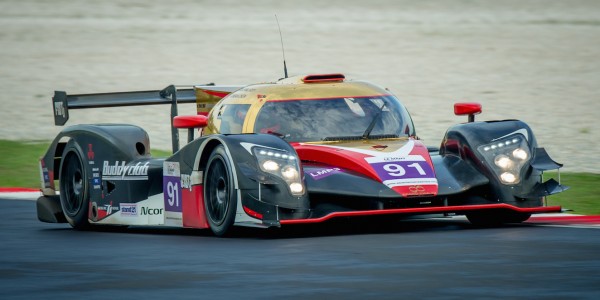 Ollie Millroy made a good impression on his first appearance in an LMP3 car at Sepang, taking pole position and a podium in the Asian Le Mans Sprint Cup series for Team AAI last weekend (May 28/29).

A downpour before qualifying mixed up the field, and Ollie managed to set a competitive time on the first flying lap of the session, which would be enough to secure pole for the #91 entry.

With crew-mate Jun-San Chen unable to compete due to food poisoning, Ollie had to take the car for the entire 60-minute race on Saturday, held in hot conditions.

Despite starting on pole, the Adess was quickly passed and fell back into third place, though the 25-year old eventually brought it home for a fine second place. On Sunday however, the team were unable to compete in race 2 due to a broken bellhousing.

“There are encouraging signs. We’re a lot closer than we were in Asian Le Mans Series, so the car is getting better every race. We’re looking forward to getting the updated parts from Adess,” Ollie said afterwards.

“I was able to help the team develop the car and my technical input made a difference. The team were very happy as this was the quickest it had been around this circuit by about two seconds, if you take away the improved track surface. We’ve made a massive step forward and we’ve got to do the same again.”

“It was a great experience to drive an LMP3 machine – it’s another box ticked for me. I had fun – it’s like being back in a Formula Renault. Having a bit less weight and downforce was good and I’d like to drive it again. The plan is to do the next race of the AsLMSC with the updates from Adess – we know the new bodywork is 20kg lighter. We’ll see where we are after that.”

The Englishman stayed in Malaysia after the race to help undertake development work on two very different machines: a BMW M6 GT3 and McLaren 650s GT3.

“The M6 GT3 is incredible, its very similar to the Ferrari 488 GT3 I drove at Motegi in the Super Taikyu Endurance Series. There’s lots of aero, a turbocharged engine and it’s very good on the brakes,” Ollie enthused.

“It feels big at low speed but it has tons of grip, and on lap six I was already quicker than I had been here in the Z4 GT3. I shook the car down with the engineers from BMW for the customer, Lam Yu, who races in AsLMS.

“We’ll also be in a 650s GT3. The McLaren is a completely different beast to the M6 GT3 and 488 GT3. It has a shorter wheelbase, but is a great car with lots of downforce.”

And the 25-year old hopes to continue competing in the region. “I know Team AAI are looking to compete in the AsLMS and I hope to continue to drive with Jun-San Chen and the rest of the crew,” said Ollie.