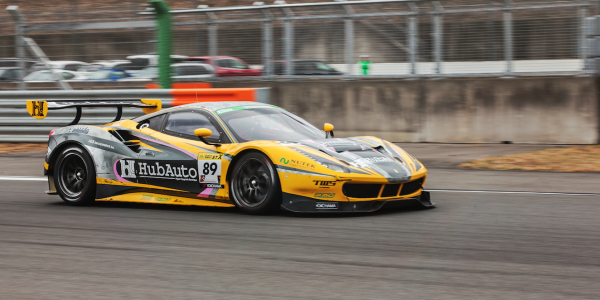 Faced with unfavourable odds after his HubAuto Racing crew hit trouble in the opening stages of the five-hour race, Millroy squeezed every inch of performance from his #89 Ferrari 488 GT3 racer during what he called the hardest stint of his career.

Despite never having raced at the challenging Japanese venue near Tokyo, the Briton refused to give up and was able to make the most of his spell at the wheel, using his strong pace to fully exploit the Italian car’s balance and resurrect his crew’s chances of a points-scoring result.

Cold ambient and track temperatures on Saturday gave Millroy and his co-drivers – Hiroki Yoshimoto, Yuya Sakamoto and Morris Chen – few opportunities to shine in qualifying, but the Surrey-based ace took his chance when the time came.

Despite the circuit’s succession of slow-speed bends favouring other ST-X machines over the Ferrari, Millroy pulled out all the stops to set the third fastest lap overall. However, the series’ aggregate qualifying system meant that his stellar efforts went unrewarded, with HubAuto Racing starting 10th for the following day’s showdown.

Race starter Chen kept a level head and consolidated the team’s position in the race’s first thirty minutes. However, an incident with a rival competitor left the Ferrari in the gravel, four laps from the lead and eight places worse off once the car resumed running, thus leaving Millroy with a significant challenge upon assuming the wheel 60 minutes into the race.

Tasked with rescuing a result for the team, the 25-year-old was unfazed by the adverse circumstances and showed superb pace to move from 18th up to 10th overall during his stint, setting several fastest laps along the way.

His solid work gave co-drivers Hiroki and Yuya renewed confidence and they combined to move up two more spots to eighth in class and overall by the chequered flag, thus securing a batch of all-important championship points.

“It certainly wasn’t easy out there, but considering the circumstances I’m very happy with how we came back,” said Millroy afterwards. “We knew from the outset that some of the other cars would be very quick, especially with the Balance of Performance regulations and Motegi’s huge number of slow-speed turns. Nevertheless, our car had fantastic pace and I was able to put in some very quick lap times during qualifying, so I was confident that we could march up the grid during the race.

“Morris was unlucky with the incident at the beginning. Our front splitter, and therefore the car’s aerodynamic performance, was affected as a result, but thankfully the damage wasn’t terminal and we managed to recover the car without returning it to the garage.

“My stint was really tough – probably the hardest I’ve ever done! There was a lot of time to be made up, as well as a fair number of slower cars to weave around, but that meant we could really see what our Ferrari 488 GT3 could do.

“It certainly didn’t disappoint and I was able to make a lot of progress by the time I had to hand over the reins. Hiroki and Yuya continued our progress and did a great job in bringing the car home to score some valuable points.

“All things considered I’m pleased with our result and delighted by how competitive the car was, so I look forward to being able to drive it again soon.”