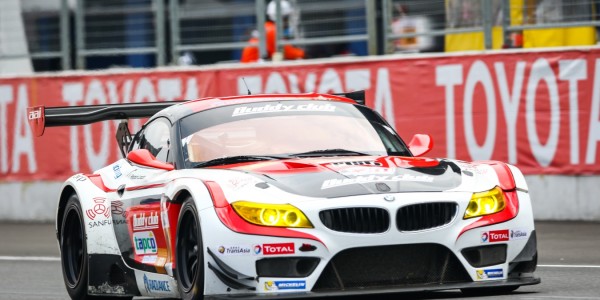 Team AAI’s decision to make fewer tyre changes than other competitors looked to be paying off, as Millroy and his co-drivers had built up a significant gap to their main rivals in the GT category and were looking strong for the class victory.

However, when the safety car was deployed 40 minutes from the end of the race their advantage was reduced to almost nothing. A number of cars on fresher rubber were subsequently able to overtake once racing resumed, but the #91 BMW Z4 GT3 maintained its fast race pace and consolidated a fantastic podium result.

Despite racing at the Buriram United International Circuit for the first time, Millroy quickly adapted to the venue’s technical challenges, demonstrating ominously strong long-run speed on the way to comfortably clocking the fastest lap of the second free practice session.

With the team opting to focus on race set-up for Saturday’s qualifying shootout, Millroy was given a tough task to secure a top grid position. Nevertheless, the 25 year-old Briton eased into fifth spot less than half a second off the class-leading pace.

Millroy was the first to take the wheel for Sunday’s race and made a typically blinding getaway, fully exploiting the #91 machine’s excellent handling and tyre management to produce what he described as one of the best drives of his career. Indeed, over his 70-minute stint the British ace overtook all of his main class rivals to grab the lead and set up what looked to be an astonishing victory.

Following the first driver and tyre changes, Millroy’s speed gave co-driver Chen a clear road ahead with which to build a 15-second advantage over his nearest challenger before handing over to Taniguchi. Despite being overtaken by two competitors with fresher tyres in the wake of the safety car period, Taniguchi consolidated the team’s effort to finish third and maintain Team AAI’s record of making the podium in every race they’ve completed this season.

“The disruption caused by the safety car in Nobuteru’s stint compromised our race plan and was difficult to swallow, but we should certainly be proud of our performance this time around,” emphasised Millroy. “Everything ran like clockwork and the car was faultless all weekend, which is extremely encouraging for the rest of the season.

“My stint couldn’t have gone better, either; the car was performing very well and I was able to overtake the four competitors in front of me by the time I pitted. It was certainly one of the best opening stints I’ve ever had, so I’m delighted with how I drove.

“Nevertheless, our tyre strategy had put us in a very strong position prior to the safety car incident, so everything was in place for a comfortable victory. It’s a real shame, but these things happen in motorsport; we just have to accept what happened and head to the next round ready to fight for the win.”
Millroy’s performance will stand him in good stead for the season finale in Sepang, where he believes the squad will be able to challenge for victory once more.

“Just like this weekend, we turned things around when we last visited Sepang and achieved a very good result, so anything is possible!” he enthused. “The team is based there and it’s a circuit we understand well, so I expect our performance to be strong. We have nothing to lose and everything to gain; we’ll go all out for the win and hopefully end the season on a high!”

Millroy will return to the track once more in Malaysia for the final round of the season on 23/24 January.