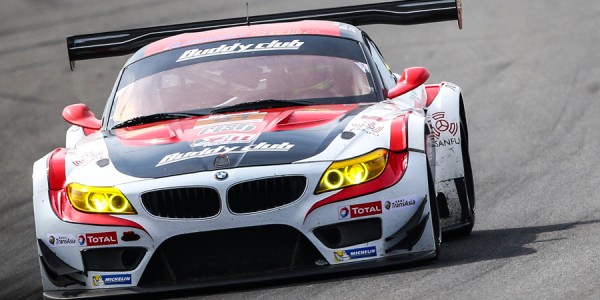 Ollie Millroy topped off a successful Asian Le Mans Series campaign with an excellent second place finish at Sepang in Malaysia last weekend (24 January) to give his AAI Motorsports crew a third consecutive podium this season.

The British ace negotiated sweltering track temperatures and heavy traffic in the contest’s opening stint to establish a 30-second lead over his GT class rivals, and a dominant victory looked on the cards after equally strong performances from his co-drivers Jun San Chen and Nobuteru Taniguchi.

However, an unexplained problem experienced by Taniguchi towards the end of the race significantly hindered their progress, causing their #91 BMW Z4 GT3 to lose the lead with only a handful of laps to go. The Japanese driver nevertheless fought valiantly until the chequered flag and secured the runner-up spot a comfortable 40 seconds clear of the next finisher.

In a bid to combat the superior single-lap pace of rivals using 2016-spec cars during Saturday’s qualifying session, Millroy strategically played to his older machine’s strengths by working on finding a set-up that would maximise the team’s performance on race day. Entrusted with qualifying duties as the fastest of his car’s trio, Millroy drove solidly to line up fourth on the grid.

Millroy’s Sunday performance was almost a carbon copy of that at the previous round in Thailand as he dispatched three GT class rivals within just five laps and, making full use of the set-up he carefully honed during practice and qualifying, slashed the gap to the first-placed GT car.

An early pit-stop from the category leader gave Millroy the opportunity to gain track position with a tactically-timed driver change a few laps later, which paid off perfectly after a smooth transition saw team owner Jun San emerge from the pits with a healthy lead at the head of the class.

Both Jun San and Taniguchi looked set to reward Millroy’s hard work with a well-deserved victory after two strong stints, until the mystery issue that reared its head in the closing stages made staying in front an impossible challenge.

The result marked a third straight podium finish for Millroy and his team-mates and promoted the trio to fourth in the overall championship standings after a hard-fought campaign.

“It’s been a tough season with some stiff competition, but scoring a podium in every race we’ve finished is a fantastic achievement and we should all be proud,” said Millroy afterwards. “The newer cars were astonishingly quick in Thailand, so we planned to counteract that and maximise our Z4’s strengths right from the get-go.

“As track temperatures were consistently in the mid-50s, we made tyre management a top priority for the race. Our car is very kind on its rubber, which allowed all of us to really put the hammer down and build a large gap to the rest of the class when it mattered.

“We don’t know what caused the problem towards the end of Nobuteru’s stint. Of course, it was a shame to lose our lead in such a way, but that happens in racing; we all need a bit of luck, and this time we didn’t have it! Nevertheless, we’ll do our best to look into what happened and make sure it doesn’t crop up again.”

As the sun sets on another highly rewarding campaign, Millroy is hungry for even more success in the near future.

“I’ve really enjoyed racing with Team AAI this year. It’s been a fantastically enjoyable ride,” Millroy enthused. “I’d love to compete in the Asian Le Mans Series next season as well, but I’m also considering a return to Europe. There are numerous options out there, so we’ll see what happens!”