HIT WITH BAD LUCK IN ZHUHAI 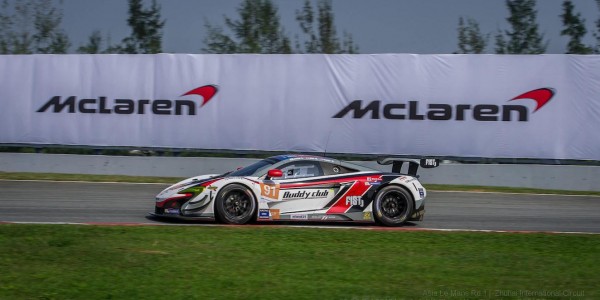 Team AAI made the decision to retire their McLaren 650S GT3 just 15 minutes from the end of the Asian Le Mans Series race in Zhuhai due to an incurable technical issue.

26-year-old Ollie Millroy, along with co-drivers Jun-San Chen and Xavier Maassen, negotiated brilliantly through the GT class field to run as high as second, before a technical problem meant they had to retire the #91 McLaren 650S GT3 with the chequered flag in sight.

Following a successful test on Friday, the Taiwan-based team were unable to get any running done in the Saturday practice sessions as they were missing a compulsory homologated part, which had to be flown in from Shanghai. Because of this, all three drivers had to do at least one lap during the 15-minute qualifying session. As Millroy’s team-mate Xavier Maassen did not have enough time to complete a full lap, the squad had to line-up on the back of the grid.

Millroy took the start of the race and fought his way superbly through the chaos to climb up to second. The team then decided to make their mandatory driver change behind the safety car, with Chen taking over from the Brit just after the first hour mark.

Now on a different strategy to the majority of their competitors, the 2014 Asian Le Mans Series GT Champion ran an impressive stint and the team were confident that they would be able to gain their early advantage back by the end of the race.

Chen then handed over the car to Maassen for the final mandatory pit stop just after the halfway point. All looked to be going to plan, but another safety car came out just as the Dutchman pitted for fuel, meaning the team no longer had a strategic advantage over their opposition.

Then, with just 15 minutes to go – whilst the 2009 24 Hours of Le Mans runner-up was running in seventh – the team encountered a technical issue and Maassen was forced to bring the McLaren into the pits to retire.

“It was just one of those weekends,” reflected Millroy. “We started off really well in testing on the Friday, but weren’t allowed to participate in either practice session on Saturday because we didn’t have a compulsory part fitted to the car.

“It’s a shame about qualifying, because if we had been able to get some laps in during practice we would have definitely started much higher up. My first stint felt incredible, it was chaotic with a few safety cars, but I enjoyed working my way through the field and by the time I handed the car over to Jun-San we were in second. I was very happy with that.

“Jun-San drove brilliantly during his stint, it was the best performance he’s produced while I’ve been racing with him and we were looking really good. Xavier was also doing a great job, the safety car didn’t work in our favour strategy wise, but we were still on for a decent result before the brake problem. Even with the late retirement we were classified eighth, giving us a handful of points to take forward to the next round.”

The next destination for Millroy will be the 4 Hours of Fuji on 4th December and he is confident that the fast nature of the circuit will favour his McLaren 650S GT3.

“Zhuhai was a tough circuit for us with a lot of slow corners and heavy braking zones,” Millroy explained. “I’m really looking forward to heading to the Fuji Speedway though as it’s a lot quicker and more suited to the McLaren’s great high-speed stability. I’m confident that we will be able to challenge for a good result there.”